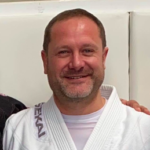 Jason grew up in the 70’s and 80’s and like many people, he was greatly influenced by martial artists and famous actors such as Bruce Lee and Chuck Norris.

In relation to combat sports and fighting arts, Jason was also greatly influenced by his own father who grew up in Holland and had learnt to box and was a brown belt in Japanese Jujitsu/Judo.  Jason’s father Jeffrey Besters for a time also volunteered at a local Police Boys Club  (now PCYC) in a suburb of Sydney teaching youth how to Box.  Jason’s father who had grown up in war torn Europe and understood what it meant to have to fight to survive, taught him the fundamentals of street fighting and encouraged him to start training in a martial art and combat sport as a young boy.

Jason began his journey training for a short while with a Shotokan Karate-do academy under Sensei Ivan Pacek and then transitioned to Uechi-Ryu Karate-do where he was awarded his Probationary Black Belt under the instruction of Sensei David Calvert, Sensei John Flink and later Uechi-Ryu Karate-do President Arthur Moulas.  Unfortunately the local Mittagong club closed down and Jason found himself in a situation where he needed to find a new club.

Jason found a Freestyle Mixed Traditional & Modern Martial Arts club affiliated with U.K.B. Kenkokan Karate-do Head of Style Hanshi Pat McKean (then Shihan) .  This Freestyle club was ahead of its time and was teaching a form of Mixed Martial Arts before MMA was a common thing and even before the first Ultimate Fighting Challenge (UFC).  Jason was exposed to a mixture of core techniques from combat and martial arts systems such as Karate, Taekwondo, Hapkido, Boxing, Kickboxing, Wrestling, Judo, Jiujitsu and Kung fu including traditional weaponry and some entry level gymnastics.  It was also the first time that Jason had been exposed to the fundamental principles of self-preservation and self-defence strategies. During this time Jason also undertook training in Child Protective Behaviours.  This club unfortunately also closed down.

Jason enjoyed competing in Karate Tournaments and had competition success in both Junior and Senior divisions.  He competed in Okinawan Style Tournaments which had full contact to legs and body and also competed in Koshiki Karate Tournaments (hard contact with protective head gear and chest protection).  Jason is a former NSW State and Australian Koshiki Karate Champion and Australian Representative at Black Belt level in International Tournaments.  Around this same time Jason started to cross train in Boxing under the late Al Maloney and the Maloney family who ran the Bowral Boxing Club at that time.  This cross training in a traditional boxing club was a very important step in truly understanding combat sports and certain aspects of contact training.

Jason ran multiple classes across the Southern Highlands at that time.  Jason took a break from instructing to pursue additional study and to eventually start his own business in financial services and business consulting.

While working and studying part-time Jason ended up helping to run a local kids club (as the activity and games leader) which often had anywhere between 70 and 120 kids/youth attending every Friday night.

Sensei Jason strongly believes that training in Martial Arts is all about a personal journey of improvement and self-development.

Your mind, Your Body, Your Journey, Your Best!

I see teaching people Martial Arts, Combat Sports and Self-Preservation / Self-Defence skills as my way of helping them become the best version of themselves.

I will always be a student, there is always something new to learn or old to improve.  It is a personal, never ending journey of improvement.”